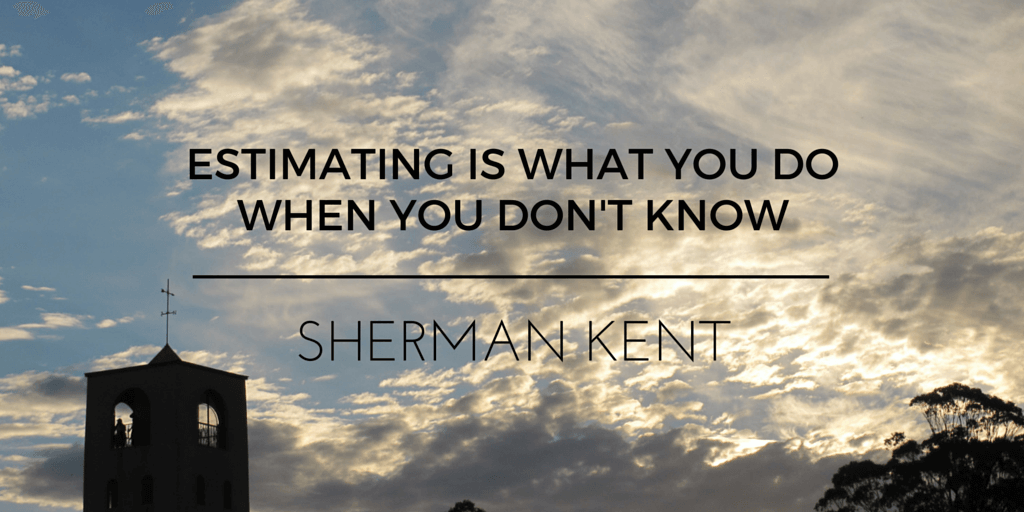 Planning Projects | How to give it a T.I.C.K.

When you start a project typically you make a project plan.

Problem with planning projects, and this is the problem with all plans really, at the time of planning you only know what you know right then. The future is unknown.

So, we could say that to a certain extent project plans are ‘made up’.

Or as others have put it “Estimating is what we do when we don’t know.” Typically, to get a project signed off (i.e. getting someone to hand over cash to pay for the project) requires some form of higher up endorsement.

With the wish for endorsement (and cash) comes the need for some level of certainty. People like to feel that when they endorse something or handover money for it that it has a reasonable chance at success.  Understandable position.

To persuade others, and to feel like a project is likely to be successful we reduce risk and uncertainty. There is risk and uncertainty associated with getting out of bed in the morning, but most of us have pushed that to the back of our minds, often enough, to not even notice it most days.

So, to a certain extent project plans can downplay risk and uncertainty.

The problem that I have with some project management methodologies and measures is that they seem to assume (much like a small child does) that the world stands still whilst the project is ‘in play’ and that everything assumed at the beginning will still be so at the end.

This is clearly a fiction.*

Projects are undertaken at the same time as the messy business of life goes on around them. They are an attempt at focus but they absolutely exist within a context. The context of the projects that I work on is the speedily evolving state of retail; in a recent conversation with a learned friend we were debating which industry is worse. I have some reasonable knowledge of retail systems and how they are hanging together and let’s just say it’s not that elegant once you’ve seen under the hood. But, as industries go, I think that retail is almost doing well by default because the consumer is pulling us along and making us keep up with (or chase after) them.

So, in an attempt at articulating the ancient art of connecting with people, whilst maintaining some level of control over the intentions of the project we ask…

‘Stay on target’ says gold five, to gold leader ‘stay on target’; most of the people I know are familiar with this little Star Wars extract (but I know a lot of people who work in IT).

As the pilot gets blown to smithereens, we note that even diligent focus can still get you blown away. What’s harder, I think, is staying ‘on target’ but occasionally taking a step back. To look, and think, about the context, the key principles and ask ‘what is it that I still don’t know?’ about this project.

Employing the T.I.C.K. principle again, we have been debating recently the best way to keep projects and sanity whilst in the midst of it all.

Retail is in the detail, it’s a phrase you’ve probably heard if you’ve been around retailers long enough.  It’s true, and it can also be applied to projects.

We need to be in the detail when it comes to:

When I say technical processes I am not just talking about the people who write the code. There are also the people and processes that check that the interfaces work and test the hell out of that new piece of software. This is where single minded focus can be best employed.

For project managers to be helpful they need to plan for those people to not have too many things on at the same time.

Allow them the focus that they need to do this kind of deep work by not interrupting, schedule time to catch up and be mindful that for every interruption there is an additional 25 mins that it takes for them to get back into the zone.  If you can create a space where they can be a bit removed from the action and employ the open/closed door approach (open meaning we can be interrupted and closed meaning please leave us alone to focus), then this will help them to get through the work they need to.

Take the same approach yourself. Or take on some of the ideas in this great commentary on email.

Ignorance | put something in the bank for the unknown unknown

There’s this concept of the known unknown, and unknown unknown. The known unknown is the group of things that you know you don’t know about. When planning a project these are the things that have some elastic built into the timeline, because we’re not sure how long or complex the task will be.

Typically a good way to tackle this stuff is to schedule it as early as possible so that if it turns out to be much messier than you imagined you’ve got some way to make up the time and effort.

Much harder to plan for and the thing that often brings us to a screaming left turn when we were planning on continuing straight on down the road, is the unknown unknown. This is the stuff that you don’t even know you don’t know.

You can’t tackle this early, because you don’t know what it is and when it will hit you. The best defense we have for this one is keep questioning and stay curious. If you keep asking questions and persist in looking for the unknown unknown it will hopefully surface early enough that you have a way to recover. We cannot endlessly build in contingency, so my approach to this one is the advice that our builder gave us many years ago about staying on budget.

‘Try to save 10% on every line whether you need to or not. That way when something unknown crops up, you’ll have some cash in the bank to draw on.’

I don’t always manage to do this, and it’s a hard ask but it’s definitely one worth striving for, in both time and money so that when the unknown unknown comes knocking you’ve got something in the bank.

Context | keeping an eye on the bigger picture

So the world of total retail, immersive stores, artificial intelligence, augmented and integrated everything is heading towards us at a cracking pace. Whatever your industry there is probably a similar pace of change going on there too.

If you’re keeping one eye on the bigger picture and two eyes on the detail where did the third eye come from? It sounds like a magic trick. In practice, this is not that easy, and in my experience it’s really hard to get sponsors and project leaders to step back and take a moment to take a breath and re-look at the plan and look around.

What’s happening in your industry? What are other teams in your organisation working on?

Has the context and focus for the project moved (internally and externally)?

Connecting with others and regularly reviewing the market in which you’re operating as well as continuing to state what is it that you’re working on and why, reminds those around you what you’re up to. Encourage questions, they might help you uncover some unknown unknowns. Clearly, this makes more sense in a longer project, but if you’re working on a smaller project that’s got a bit spend it doesn’t hurt to make this effort.

If you can, agree on these context milestones at the beginning of the project then you stand a much better chance of being able to make time to review and reconsider the plan.

Key Principle: or “Will it make the boat go faster?”

Listening to Kieran Flannigan present recently she explained how a team developing and preparing for a boat race, kept returning to a KEY GUIDING PRINCIPLE – they would ask themselves “Will it make the boat go faster?” It’s a good point, and a great technique to use.

Projects can be a long journey and evolve into differing forms along the way. What is the key objective that we’re trying to deliver on? This is the big picture thinking and great intent that had us start down this path to begin with.

Subscribing to the Simon Sinek philosophy of “people don’t buy what you do, they buy WHY you do it,” is entirely relevant to projects.

Is the reason WHY we are doing this still true?

We need a mechanism to remind and revisit why we started down this part to start with. Having a key guiding principle helps us to bring everything back to the ‘intention’.

So how can we make the WHY come to life?

Print it out and stick it on the wall in the project room, above your desk, make key rings or stickers or buttons or whatever is needed to remind yourself of the guiding WHY of this project. When those endless discussions about some level of minute detail that no one is going to notice get out of control, return to the KEY PRINCIPLE.

Will it make [insert your purpose here]?

Park it, delegate it, come back to it later, make a quick decision, or just plain don’t do it.

There’s more than enough to be getting on with.

Lastly, but by no means least (but it doesn’t get a tick because it applies to everything) try to keep your sense of humour and fun. Enjoy!

We help people with project plans and support them through project changes. Please send us a note or reach out to connect if you’re stuck.

*and may well be a fiction created to improve that feeling of certainty.